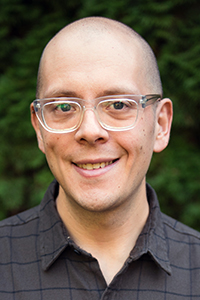 Maxwell Foxman is an Assistant Professor of Media Studies/Game Studies at the University of Oregon at the School of Journalism and Communication. His primary research focus is on how play manifests in non-game contexts—including social media, politics and journalistic institutions. His work consistently explores the way media makers frame games and play in their activities and professional lives.
Foxman began his academic career by studying the world of gamification, especially in the realms of political campaigns and digital apps. This initial work expanded to analyses of the influence of games and play in commerce and industry. His dissertation research and a forthcoming monograph investigate how play and the business complex of games impact early adopters of immersive technology like Virtual Reality and Augmented Reality. Additionally, he is co-authoring an examination into the mainstreaming of game journalism. He is also investigating the effect of games in cultural production (through game engines like Unity) and a variety of other arenas, such as collegiate esports. His work has appeared in numerous journals including New Media and Society, Social Media + Society, First Monday, Computational Culture, and Games and Culture.
Foxman received his PhD from Columbia University in Communications, and also holds Masters degrees from Columbia University and New York University. He received his bachelor's degree from Columbia University.
Outside academia, Foxman has worked as a consultant for several think tanks, including SuperData, Data & Society, Thunder 11 and the Tow Center for Digital Journalism. He also founded an independent study program and taught at the Rockland Country Day School in Congers, NY.

Foxman, M. (2017). The playful newsroom: Iterating and reiterating the news and its publics. First Monday, 22(1). http://firstmonday.org/ojs/index.php/fm/article/view/7260

Foxman, M., & Nieborg, D. B. (2016). Between a Rock and a Hard Place: Games Coverage and its Network of Ambivalences. Journal of Games Criticism, 3(1). http://gamescriticism.org/articles/foxmannieborg-3-1
For a full list go to http://maxwellfoxman.info/cv/