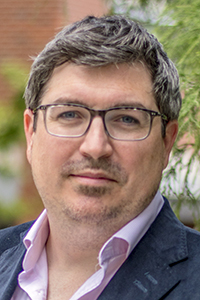 Damian Radcliffe is the Carolyn S. Chambers Professor in Journalism, a Professor of Practice, an affiliate faculty member of the Department for Middle East and North Africa Studies (MENA) and the Agora Journalism Center, and a Research Associate of the Center for Science Communication Research (SCR), at the University of Oregon.

An experienced digital analyst, consultant, journalist, and researcher, Damian has worked in editorial, research, policy, and teaching positions for the past two and a half decades in the UK, Middle East, and USA. This includes roles in all media sectors (commercial, public, government, regulatory, academic, and nonprofit/civil society) and all platforms (print, digital, TV and radio).

Damian continues to be an active journalist, writing monthly columns for ZDNet (Red Ventures) and the Donald W. Reynolds Journalism Institute (RJI) at the University of Missouri. He also writes regular features for the International Journalists' Network (IJNet), What's New in Publishing, journalism.co.uk and other outlets. Damian writes about digital trends, social media, technology, the business of media, and the evolution - and practice - of journalism.

These themes are also at the heart of the Demystifying Media speaker series, which Damian curates. He launched the series in January 2016, with the goal of bringing leading academics and industry professionals to the SOJC. To date, more than 40 experts have participated in the program.

He has been interviewed, and had his work on these topics, featured in leading trade publications such as Harvard's Nieman Lab, Columbia Journalism Review (CJR), Poynter, PBS MediaShift, Editor & Publisher, CNN's Reliable Sources, the Reuters Insitute for the Study of Journalsm and the American Press Institute. As a media commentator, he has been featured in articles by Wired, NPR, Monocle magazine, Esquire Italia, and Agence France-Presse (AFP) and on ESPN, NPR's Marketplace, Oregon Public Broadcasting (OPB) and the BBC World Service.

Before joining the University of Oregon in 2015, Damian previous employers include: The Local Radio Company, BBC, the NGO Volunteering Matters, Ofcom (the UK communications regulator), and Qatar’s Ministry of Information and Communications Technology (ictQATAR).

Radcliffe’s research focuses on the usage of social media and wider trends in local media, technology, the business of media, and journalism innovation.

A selection of Damian's syllabi, published student work and other teaching related materials can be found here.