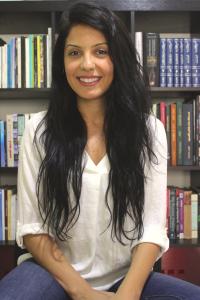 Hadil earned a BS in Journalism and Political Science from Bir-Zeit University in Palestine and an MA in Nonprofit Management from the University of Oregon, with a focus on Arts Administration. She is the co-founder of Filmlab: Palestine, a nonprofit company based in Ramallah, that aims at developing the cinema industry in Palestine. Her work in the field of cinema has created a base for her research interest Palestinian self-representation. Through her research, Hadil aims at examining the effects of soft and hard borders constucted by the occupation on the formation and self-representation of the national identity in Palestinian feature films. Her research interests include cinema studies, diasporic studies, representations, and national identity.

Master degree in Nonprofit Management with focus on Arts Administration from University of Oregon, OR, United States.

Doctoral Candidate in Media Studies at University of Oregon since 2018.

Social Media in the Middle East: 2020 in review - coauthor

Social Media in the Middle East: 2019 in review - coauthor