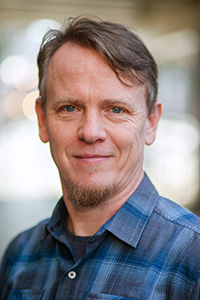 Wes Pope, Associate Professor and Co-Director of the Multimedia Journalism master’s program in Portland. Pope has worked as a photo, video, and multimedia journalist for more than 20 years, including staff positions at the Rocky Mountain News, Chicago Tribune, Santa Fe New Mexican, Times of Northwest Indiana, Tri-City Herald, and Tacoma News Tribune. He has also worked as a consultant at the San Francisco Chronicle. Before joining to the SOJC, Pope served as a Lecturer in Photojournalism & Documentary Studies at Northern Arizona University.

Pope is co-founder of Story Arc Cinematic Journalism Workshop held biannually at the University of Oregon, Portland. Video journalists and filmmakers from around the country work with our students to capture "making a difference stories" about Oregonians who are making the world a better place.