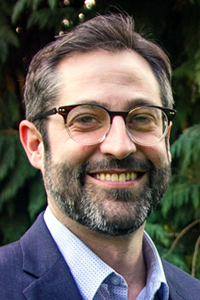 Todd Milbourn is an investigative reporter, senior instructor, and director of the University of Oregon’s master’s program in journalism. His teaching and research focuses on how journalists can earn trust, engage with communities and uncover information that helps citizens make informed choices in a democracy.

As a two-time Agora Faculty Innovation Fellow, Milbourn co-founded The 32 Percent Project, a national community engagement initiative that explores how people define trust in the news media — and what journalists can do to earn it. He’s building on that research as Engagement Director for the Catalyst Journalism Project, where he's leading a study of information needs in communities across Oregon. He's also an affiliated faculty member of UO's Agora Journalism Center.

As director of the UO’s master’s program in journalism, Milbourn trains and supports student-journalists as they build and expand their reporting skills, with a focus on community-centered storytelling. Recent graduates have secured internships at publications such as the Los Angeles Times, USA Today and High Country News.

In the classroom, Milbourn teaches courses at the graduate and undergraduate levels, including investigative reporting, media entrepreneurship and audio storytelling. Milbourn’s digital course on grammar and writing fundamentals is taken by nearly 1,000 UO undergraduates every year.

Before joining the SOJC, Milbourn worked as a reporter for The Sacramento Bee and The Modesto Bee newspapers, where he produced a string of award-winning investigations into housing fraud and environmental pollution. He’s also worked as an editor at an international business magazine based in Prague, Czech Republic, and as a broadcast journalist for the CBS television affiliate in Eugene.

Milbourn earned his MBA from the UO’s Lundquist College of Business, where his studies focused on developing sustainable business models for journalism organizations. He earned his BA in political science from the University of Minnesota.

The 32 Percent Project: How Citizens Define Trust and How Journalists Can Earn It," Agora Journalism Center, 2018

The Social Construction of Media Trust: An Exploratory Study in Underserved Communities, Journal of Applied Journalism and Media Studies, 2019