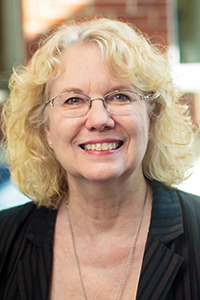 Julianne H. Newton is director of the Communication and Media Studies Master's and Ph.D. programs and professor of visual communication in the School of Journalism and Communication. She was SOJC interim dean 2013-2016, associate dean of undergraduate affairs 2008-2013, interim Journalism area head 2016-17, and Faculty Personnel Committee chair 2016-2021.

Newton is an award-winning scholar who has worked as a reporter, editor, photographer, and designer for newspapers, magazines, and electronic media. She is author of The Burden of Visual Truth: The Role of Photojournalism in Mediating Reality and co-author (with Rick Williams) of Visual Communication: Integrating Media, Art and Science, which won the 2009 Marshall McLuhan Award for Outstanding Book in Media Ecology. Her research applies ethics and cognitive theory to the study of visual behavior.

Newton was editor of Visual Communication Quarterly 2001-06, establishing the journal as a stand-alone publication, and she serves on the editorial boards of the Journal of Communication, Journalism Practice, Visual Studies, Journal of Media Ethics, EME (Explorations in Media Ecology), Visual Resources and VCQ.

Before joining the SOJC faculty in Fall 2000, she served on the faculties of The University of Texas at Austin, where she directed the Photojournalism Program, and St. Edward's University, where she directed student publications. She was born in Dallas, Texas, and spent most of the first five years of her life in Colombia and Ecuador.