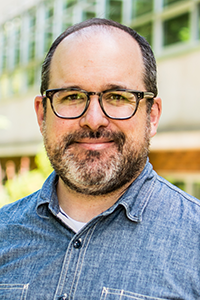 David Ewald has worked as a designer, photographer, and professor for over 20 years. He is currently a Professor in Brand Innovation at the University of Oregon's School of Journalism and Communication where he also serves as Interim Director, Advertising and Brand Responsibility Master’s Program and the Executive Director of Allen Hall Advertising.

After years in the design and advertising industries, David was a founding partner and Chief Design Officer at Uncorked, a Portland based design studio who helped clients such as Google, adidas, Bezos Family Foundation, Magnum Foundation, LEGO, and Samsung bring innovative products to life. Alongside this work, David has been instrumental in ongoing social change efforts with UNICEF Lebanon and the Richardson Center for Global Engagement, primarily in Cuba as a leader in their Fringe Diplomacy program. Ewald was a founding member of Safecast, a volunteer citizen-science organization dedicated to empowering people with data about their environment. Safecast maintains the world's largest open dataset of radiation measurements ever collected.

David has a history in and passion for teaching, both as a Professor at the University of Oregon and as a guest lecturer for other institutions such as PNCA, Portland State University, Oregon State, and ArtCenter.

David spends his free time working on photo projects and design. He is originally from Wisconsin and lives in Forest Grove, Oregon, with his wife and 12-year-old son.