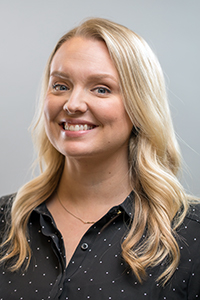 Allison VanSciver has worked as a professional designer and art director since 2007. After graduating from the S.I. Newhouse School of Public Communications at Syracuse University with a degree in graphic arts, she began her career at an advertising agency where she specialized in branding and web design. She then worked in marketing and communications at the University of Missouri, where she was the lead designer of the university’s student recruitment materials. She also led an effort to overhaul Mizzou’s visual identity system in 2016, which led to a role as the institution’s first brand manager. After joining the UO in 2018, she spent three years working in central communications before joining the SOJC full-time in 2021.

Allison centers her work around brand identity and accessibility, with an emphasis on inclusive design principles. She is a Midwesterner at heart who misses the sunshine but not the snow, and she spends much of her time outside of work going to concerts and baking.