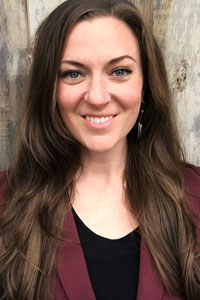 Lena Freeman is a  graduate from Southern Oregon University in Ashland, OR, earning her B.A. in Art with an emphasis in Art History in 2009. After completing her Bachelors degree, she spent two years in Dijon, France working as an au pair. In 2014, she returned to the states to pursue her Master's in Arts Administration with the University of Oregon. During her time as a masters candidate, she successfully coordinated Kids Create! Eugene, a family friendly event centered on the collaboration of ten local arts and educational organizations that provided a free day of youth arts exploration through hands-on activities and live performances.

From 2016 to 2019, Lena worked for the Jordan Schnitzer Museum of Art as a Communications Assistant. In 2017, she also joined the efforts of the 20x21 EUG Mural Project; an initiative of the City of Eugene Cultural Service's Public Art Program to create 20 or more world-class outdoor murals before the 2021 IAAF World Championships. In addition to her work with 20x21, she co-created Urban Canvas, the City of Eugene's local mural program, and served as a program coordinator for Cultural Service's Community Events team. During her time with Cultural Services, she has worked in many capacities, including operations coordination, signature event coordination, volunteer management, and communications support.

Master of Science, Arts Administration; 2016
University of Oregon, Eugene, OR